I think what the DCCC actions say to the district is, ‘we don’t really care about the work you’ve done, we don’t care about the decisions that you’ve made.’ – Dana Balter

The race for the 24th Congressional District has been anything but normal, given the twists and turns leading up to and including the unexpected challenge for the Democratic Party’s Nomination. There will be a Primary Election in the Democratic Party for the designation to face incumbent John Katko in November.

There’s an energy emanating from the Dana Balter Campaign, a headquarters abuzz with activity according to the candidate, “We have lots of volunteer‘s out knocking on doors.”

We sat down for a discussion with Dana Balter candidate for the 24th Congressional District, the seat currently being held by Republican John Katko.  For months Balter has been working to solidify her democratic base, starting by uniting the politically progressive wing of the party, a task which has been described by some as akin to rounding up Ferrell cats. Balter succeeded in uniting democratic committees in all four counties that comprise the 24th Congressional District.

Urban CNY: What has been the Response to your Candidacy?

Balter:  “The response that they’ve gotten has been fantastic, almost everybody that they talk to is excited, not just about this campaign but about the opportunity to bring change for our community, which is really what the campaign is focused on. So, I’m very encouraged when I hear that feedback from our volunteers, because it means that our message is getting out there, but it also means that the people that we’re talking to are ready to make this happen. And that’s what really matters; I want to be in office so that I can fight for the things that are better for our community. 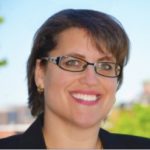 Fighting for things that are going to make us stronger healthier and more prosperous. But, I won’t be able to do it alone, it’s going to be a team effort and I’m going to need to people here in the District to raise their voices in support of those changes. Then I can go to the floor of the house and say, look at all of these people in my District that are asking for this, we have to make this happen. That’s why I’m so excited about the level of enthusiasm that we’re seeing from people, for me that means we’re actually going to be able to make change.

Urban CNY: What differentiates you from your opponent Juanita Perez Williams?

Balter: What I think is different between the two of us, is how and why we got into this race. For me the decision getting into this race was a rather organic one, I teach at the university. I teach courses in Citizenship, Policy, Administration and Democracy.  And so I was talking to my students’ everyday about how beautiful our democracy is and how important it is for a person to be engaged. And how we as people who live in this democratic society; get to shape the affairs of society, get to shape the things that affect our lives, get to shape policy.  So, I talk about that in my class, and then I go home at night and watch the news.  And see all of the things that Donald trump and his administration were doing and what the GOP in power in congress was allowing him to do. I couldn’t reconcile the two, I couldn’t watch that happen and not stand up and do something about it, like I was telling my students we’re supposed to do.

So, I decided I had to get involved. The things that I’m fighting for in this campaign, the issues I made part of my platform grew organically out of my work as a community organizer. I was spending my time talking to people all across the district who are engaged in real struggle against difficult things, against gun violence in our community, against poverty. Trying to make our educational system better for our kids; struggling to be able to afford to go to the doctor and afford to buy the medications you need.  It was all of these things I was connecting with people on, that led me to say, these are the issues that I want to stand for and fight for. I saw this need and felt like I could make a difference. That I was in a position to be able to stand up and say, I can run, I can do this and I want to run on your behalf.  That’s really how my evolution into a candidate happened. I think that’s very different from what you’ve seen from my opponent.

Balter:” I think that’s an important difference.  As far as the issues go, I don’t yet know what the differences are between us, because I don’t know where Juanita Perez Williams stands on any of these issues. I followed her in the mayor’s race, but there she was talking about local issues. I don’t know where she stands on federal issues, I haven’t heard her share positions with anybody at public events that I’ve been at, she’s not responded. I’m looking forward to hearing from her at some of the debates or candidates forums we have, what her positions on the issues are, but at this point I don’t know.”

Urban CNY: Do You Feel Betrayed by the Democratic Congressional Campaign Committee?

Balter: I think what they did was a bad decision. What made me angry about it I wasn’t angry for myself, I was angry for the district. Because I think what the DCCC actions say to the district is, ‘we don’t really care about the work you’ve done, we don’t care about the decisions that you’ve made. We’re going to discredit all of the months of time and energy and effort you’ve put into this campaign, and we’re gonna step in here and tell you what’s good for you’. We’re seeing them do this in District all over the country; this is a pattern on how they approach this process.

It shows the same disrespect for the voter that John Katko shows for the voter by refusing to have Town Hall meetings, by refusing to engage with people who live in the district. It’s that same disconnect of saying ‘I can represent you because I know what’s best for you, and I don’t have to talk to you about it and I get to make the decisions’

I think that’s fundamentally wrong, I think that goes against what political representation is supposed to be.  It’s supposed to come from the people up, not from the top down. That made me angry on behalf of the hundreds of people that were out working in the field for the campaign every day. It made me angry for the people who come up to me after an event, and talk to me about how grateful they are to have somebody standing up and fighting for these issues, and fighting for the things they believe in. It discredited all of their time energy and intention and I think that’s wrong.”