“The Westcott Street Massacre” occurred on September 21st in front of the Westcott Theater, in Syracuse.

For those who believe stories about urban life aren’t an important part of journalism, look no further than winners announced at the Syracuse Press Club’s 40th Annual Professional Recognition Awards.  News and stories of interest from Urban Syracuse made an impact by competing against some of the oldest established news organizations in Central New York. 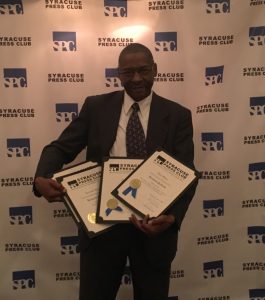 Urban CNY has been competing since 2005 in the Syracuse Press Club Professional Recognition Awards. The following are “peer-reviewed” award winning writing produced by urbancny.com/The Constitution.  The publication has been around in print and digital formats since 1989.

Starting as a print publication in 1989 urbancny.com is a culmination of 29 years as; The Constitution, to The Constitution/Urban CNY and our web incarnation urbancny.com; News and stories of interest from Urban Syracuse made an impact by competing against some of the oldest established news organizations in Central New York. Almost 30 years of experience covering urban life in Central New York.

Price Rite Vs Nojaim’s Supermarket: Is There a Civil War Between Neighborhoods?

This became an epic battle between neighborhoods, as two grocery stores receive government subsidies. The story goes behind the scenes as to why Nojaim’s Market closed, after being in business almost 100 years. One store is across the street from James Geddes Housing Project, the other; 7 blocks away, in an area that’s built over 90 new homes to create a neighborhood of homeowners. This sparked an intense debate over government subsidies, Price Rite Vs Nojaim’s Supermarket: Is There a Civil War Between Neighborhoods?   Asks the question, did Price Rite’s construction put Nojaim’s out of business?

Read the Story:Price Rite Vs Nojaim’s Supermarket: Is There a Civil War Between Neighborhoods? 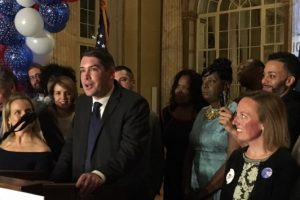 This was not supposed to happen. Early polling indicated Democratic Party nominee Juanita Perez Williams held a commanding lead, African- American support for her opponent Ben Walsh, was at 2%. The Democratic Party has had Syracuse and its voters as a dependable voter rich base since the late 1960’s. Urban CNY followed the campaign from the now famous, Dem’s for Ben Rally, where Juanita Perez Williams supporters heckled the independent candidate, in Spanish, to his surge in support from all sectors of the electorate as he waged his “Rise Above” campaign.

The Syracuse Post Standard’s web component, Syracuse.com provided a linked on its site to urbancny.com’s coverage of the Dem’s for Ben event. Urban CNY Special Report: How the Ben Walsh Campaign Won the Syracuse Mayoral Election; provides the answers to a question many had on election night, “How did that happen?” 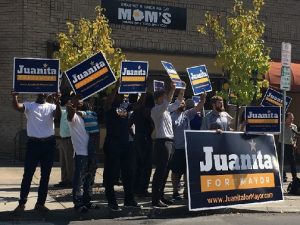 “The Westcott Street Massacre” occurred on September 21st in front of the Westcott Theater. Independent candidate for mayor, Ben Walsh was in the neighborhood where a small group of Democrats gathered in a show of support. In the photo, Syracuse Democratic Mayoral Candidate Juanita Perez Williams supporters are shown heckling Independent Candidate Ben Walsh.  At this time the Democratic candidate held a lead in the polls and Walsh’s support among African-Americans was at a paltry 2%. This event has been nicknamed, the Westcott Street Massacre, because it is seen as the day Perez Williams lost the mayor’s race. The impact of this event flowed through the Syracuse electorate like water. Picture only:  “The Westcott Street Massacre”