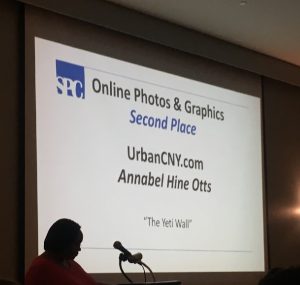 We will host an event celebrating our SPC recognition, in addition to our 30th Anniversary Year. (To be announced)

Coincidence, that for two consecutive years, the award winning photo was taken on Westcott Street.

The event was held April 27, 2019 at the Genesee Grande Hotel, 1060 E. Genesee St in Syracuse. Things got underway with a cash bar at 6 p.m., and dinner at 7 p.m. with the program following. This is the largest annual gathering of local media in the region.

Urban CNY has been competing since 2005 in the Syracuse Press Club Professional Recognition Awards and has been honored 15 consecutive years.

The year 2019 is the culmination of 30 years starting as a print publication in 1989; The Constitution, to The Constitution/Urban CNY and our web incarnation urbancny.com.

News and stories of interest Syracuse from urbancny.com made an impact by competing against some of the oldest established news organizations in Central New York. 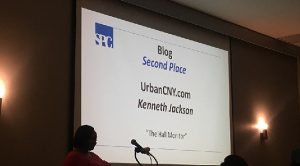 said,” Again, thank you to our readers who’ve supported us for 30 years. As I was sitting in the event room at the Genesee Grand, I realized that this spot was once the car entry overhang to the Mohawk Motor Lodge. I grew up two blocks from here and walked the very path through what is now their event room. The irony, as we begin a community wide discussion on the future of the viaduct and Urban Renewal; sitting there I realized that none of the people who once lived here could afford to return, not even for dinner.”

The Press Club’s contest is conducted completely digital by the Better Newspaper Contest under the direction of Syracuse Woman Magazine editor Sarah Hall, along with Julie McMahon and Patrick Lohmann of the Post-Standard. (The entire list of Syracuse Press Club Professional Recognition Award winners will be posted online once available.)

The SPC presented a $2,000 scholarship to a journalism student, several club awards to outstanding media people. In addition, the Club made an addition to their Wall of Distinction, which is in the lobby of the Civic Center Crouse Hinds Theater.