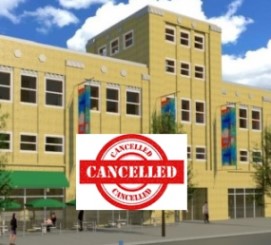 Plans for the Crouse/Sears project had been discussed with select members of what was seen as the Southside Community. Lists were assembled and the campaign was launched to gain support for a project that promised to invest 20 million dollars to transform the former Sears Department store from a storage facility into a needed drug rehabilitation facility.

No one can dispute the need for more treatment. The scourge of opioids, methamphetamine, bath salts and other substances have hit the region hard resulting in an increased investment in treatment facilities. One of the reasons given for the site selected was its proximity to the Centro Bus Hub which is several blocks to the north. The S. Salina street location is easily accessible by bus.

As supporters took to the airwaves to defend the site, there are those who painted the entire Southside as a cauldron of drugs, thus reinforcing the perception that the facility was sited at the Sears location due to a pressing neighborhood need for drug rehabilitation services. This facility is being built to meet the regions increased need for treatment. Not responding to a neighborhood crisis.

If you remember, in the not too distant past; treatment of the crack addiction problem was simple, “put them in jail.” Now, since the problem has hit suburbia particularly hard, the need for compassion and understanding is the direct opposite of the attitude when crack shattered cities across the country. There was no compassion for the largely urban crack addiction problem.

One pastor whose church is located in the immediate area reportedly has made offers to purchase surrounding residential properties, while extoling his purpose to treat souls. Once he’s done preaching, he returns to his lavish suburban retreat.

Southside neighborhood concern centered on the process Crouse/Sears used for seeking community approval. There was the perceived exclusion of area residents and residential property owners in the area. After the visceral reaction from neighborhood residents Crouse Health announced that they were going to seek another site, acknowledging neighborhoods concern about the facility.

Community Activist, and former mayoral candidate Alphonso Davis was blunt in his assessment as he took to the airwaves. In an interview on Cora Thomas’ radio program  Davis outlined concerns being expressed within neighborhood housing groups and other resident activists.

There’s an assumption that the neighborhood rejection is due to NIMBY, (not in my back yard) however, it’s tied more to the process the hospital selected to convince the neighborhood that the development was positive for the Southside.  Groups such as the Interdenominational Ministerial Alliance were briefed and gave their approval before neighborhood residents were allowed to weigh in on the project.

Having resided near the Tipperary Hill area of Syracuse for a decade, it’s clear that when a project is proposed in this neighborhood, it goes through a process. There are others who may be involved with the approval of a project, depending on whether there are Zoning issues or Building Code regulations that can prevent the proposed use of the land.  According to one person familiar with the project, claims no zoning changes were required before proceeding with the Crouse/Sears Project.  Perhaps this is due to current use of the property and cancelled expansion of the Syracuse Community Health Center located a block away.

When you observe development within the city’s more stable neighborhoods with commercial districts, there’s more neighborhood involvement and control.

For example, it took Brooklyn Pickle two years to gain approval to expand their W. Genesee St. location. When a Federal Halfway House was proposed in the area occupying a long vacant commercial property, the neighborhoods response was a resounding, no. When Byrne Dairy wanted to build one of their mega- gas station/convenience stores at the former Denny’s site, their request for curb cuts were denied. Byrne has walked away once; reportedly they’re still attempting to come up with a proposal that satisfies those who determine land use in the city.

On James Street it took several years before Walgreens provided a plan for their proposed pharmacy that met with approval from residents. During the process, residents were adamant about keeping a streetscape that was in line with their neighborhood plan. They refused to accept a design that placed a large parking lot in front of the store, ruining the look of the neighborhood business district. Ultimately, Walgreens complied.

It’s a form of urban-colonialism that allows those who aren’t part of a community to impose their will on the resident population. A vibrant liturgical community is a necessity in our community. Church has played a role in speaking up for those persons unable to speak for themselves. However, times have changed, neighborhoods and those living in them are banning together, speaking up.  Take note those most vocal about the need for placing the facility on S. Salina Street live nowhere near the planned facility. It’s become like sending missionaries into a country because, “they need our benevolent help.”

There are those audibly whining, “What are they going do with that unsightly building now?” Easy answer, residents must demand proper funding for innovation within our struggling neighborhoods. New York State has dropped 50 and 100 million dollars at a time on the 375 acre New York State Fairgrounds. We’ve allowed millions out the door with New York States property tax exemptions that allows a luxury residential property to avoid 33 million dollars in property tax assessments. We have 40 such projects in Syracuse, bleeding us dry with property tax exemptions, hundreds of millions of phantom dollars never collected.