The Urban Jobs Task Force and Legal Services of CNY created the first ever, comprehensive racial equity impact statement on the construction trades in Syracuse. With many elected officials advertising it as a local job changer for our city, the aforementioned were concerned with racial equity in the trades.

The report paints a devastatingly horrifying picture of our community, documenting a long history of racial disparities that date back well before the interstate 81 viaduct was built.

The coalition responsible for the report felt the need to create an educational resource to help leaders, stakeholders, and community members understand all that needs to be done to prepare city residents for jobs on I-81 and beyond.  The creation of this work entailed hundreds of hours of research, data analysis, interviewing, graphing, mapping, writing, and editing the following are the findings of the report. Click on link for copy of full Building Equity in the Construction Trades:  A Racial Equity Impact Statement. 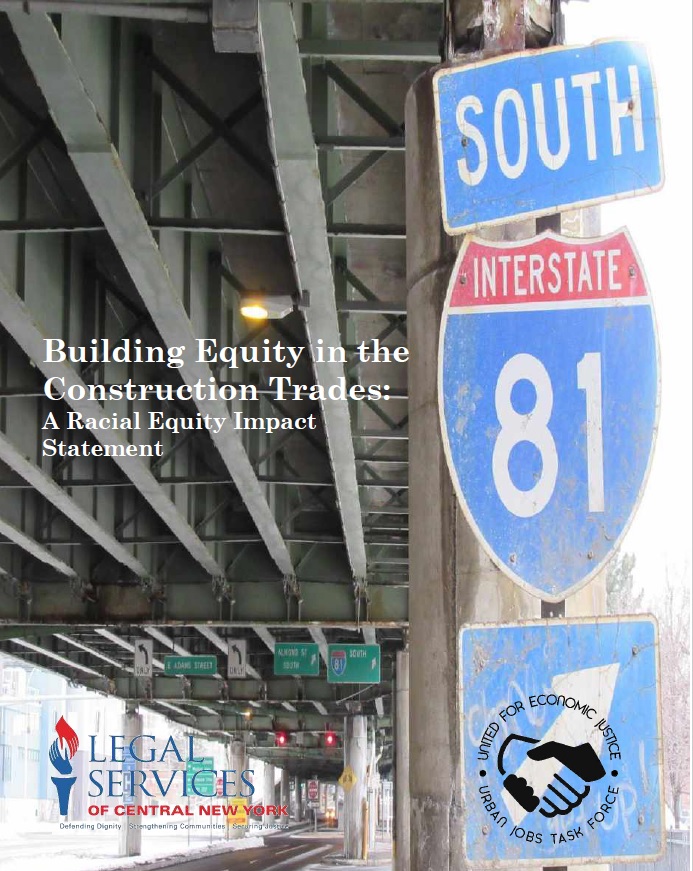 The following are highlights of sections of the report. Within are maps, statistics regarding historic data regarding the viaduct, destruction and relocation of residents from both the 15th and 9nth Wards.

An important part of understanding Syracuse’s African American community is to know how many of our families arrived. Many are in Syracuse due to the great migration of families relocating to Syracuse from the south, during a time when the need for manufacturing workers drew large numbers of workers to the area.  Building Equity in the Construction Trades:  A Racial Equity Impact Statement provides a statistical treasure trove of data documenting racial inequities in the construction trades.

Syracuse was well aware of this problem when then Mayor Tom Young commissioned a local consulting firm to conduct a disparity study that provided data to support having a local Minority and Women Business Enterprise Ordinance in the City of Syracuse. The U.S. Supreme Court had ruled in the Richmond Decision that said, municipalities that passed MWBE Ordinances aka “set-aside” programs had to prove a pattern of discrimination existed in the covered area, the report revealed the patterns. Without the city of Syracuse commissioned report, the current MWBE Ordinance would be unenforceable.

Building Equity in the Construction Trades:  A Racial Equity Impact Statement provides us with a gruesome voluminous update to something we’ve known for decades.

We will provide a different story that deal with the numbers and their impact on future policy making decisions in the city of Syracuse and Onondaga County.

History of Racial Discrimination in Syracuse

Redlining made minority-populated areas, such as Syracuse’s Ninth and Fifteenth Wards, easy targets for urban renewal schemes. Indeed, urban renewal and construction of the I-81 viaduct were critical factors in the destruction of 75% of the homes and apartments of black Syracuse residents. Compounding this injustice, discriminatory real estate practices shunted these residents almost exclusively into one location: Southside neighborhoods.

By 1970, using I-81’s expedited transportation, white flight took hold in the city causing concentrated poverty within the city and eroded the city’s tax base.

One’s race was key in the era of redlining. A black individual or family moving into a neighborhood would immediately lower its ranking perpetuating racial segregation.10 Syracuse was entrenched with redlining practices.

The 1937 residential security map for the City of Syracuse, on Page 9, shows that the highest ranking green areas included such neighborhoods as Dewitt, Meadowbrook, Sedgewick, and Strathmore.11 By contrast, the red areas consisted of the Near Westside and the former Fifteenth Ward; the lowly ranked yellow areas consisted of villages bordering the city such as, Mattydale, Nedrow, Solvay, and East Syracuse.12 Decades later these red and yellow areas are still struggling to recover from the effects of redlining.

Current State of the Syracuse Workforce

As areas of Syracuse are re-developed, city residents remain entrenched in both poverty and limited opportunity. Half of the city’s workforce leaves the city for employment in mostly low-wage work. Meanwhile, two-thirds of the jobs within Syracuse are performed by suburban commuters. Perhaps three-quarters of those commuters are white. No matter where city residents work, the majority still do not receive enough income to reach the United Way’s benchmark of a “survival wage.”

Policies Addressing Equity on Construction Projects and the Trades

Leveraging the skills of local workers, and the diversity of minority-owned businesses is constrained under current conditions. As a state-led, but federally-funded project, the I-81 Viaduct Project will utilize the Disadvantaged Business Enterprise (DBE) model for incorporating socially and economically disadvantaged enterprises. However, DBE restrictions may actually exclude some New York State-approved Minority and Women Owned Business Enterprises (MWBE) from fair participation.

We wanted to hear from people about the construction trades and how to build equity within them. To accomplish this we conducted 20 interviews with 30 leaders including local government officials, community leaders, workforce developers, financial institution leaders, developers, academics, union representatives, and union and non-union construction workers.

These leaders revealed four common themes which are: Intentionality;

Conclusion – A Call to Action

Creating racial equity in the construction trades cannot be accomplished by any one player. To be successful, there must be collaborative action to reduce racial disparities within the construction trades through an assembly of local and state government officials, construction developers, unions, workforce developers, community stakeholders, and city residents. This team should come together now to build a racially diverse workforce who will have equal opportunities to work on the I-81 Viaduct Project and other good paying construction jobs in the Syracuse area.

Regardless of race, ethnicity, or socio-economic status all Syracuse residents deserve an opportunity to enter the construction trades and bring generational wealth back into the city. With this fundamental premise, it is time for our region to strengthen its resolve to create racial equity in the construction trades.

The Urban Jobs Task Force and Legal Services of CNY end their report with a summary that reads:

“Our Racial Equity Impact Statement presents strong evidence that racial inequity is deeply rooted within the construction trades of central New York, and racial disparity exists on construction projects. Until these disparities are addressed, Syracuse’s minority residents will not have access to the well-paying construction jobs that will become available through the I-81 Viaduct Project and beyond.

This is not an acceptable path for our city. After all we have presented before you, we of course have a call to action as we aren’t in the business of playing respectability politics with people. Many of the people in this very room either have the power or work for and are representing a person who has the power and resources to begin building racial equity within our construction trades in time for I-81.

To be clear, building racial equity within the construction trades is not all about minorities, it’s about everyone.”