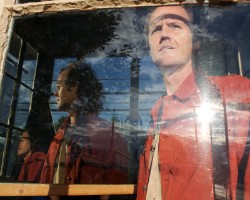 **PLEASE NOTE** Due to the 140-min. duration of the piece, the reception will precede the film at 5pm. The screening, opening with an introduction by the filmmaker, will start promptly at 5:30pm. Ben Russell will join us in-person to introduce the film and for a brief a Q&A following the screening.  Free & Open to the public.

This event is held in conjunction with the exhibition of the related new commissioned work Good Luck (Portraits) at UVP’s outdoor architectural projection venue on the Everson Museum Plaza. The exhibition will be projected onto the northern facade of the Everson Museum of Art at 401 Harrison Street, April 12 – May 26, 2018 | Th. – Sat. | dusk – 11pm.

The screening will take place in a wheelchair accessible auditorium. The film is subtitled for all spoken dialogue. CART services for the intro and Q&A portions are available upon advance request (please make request by 4/9); call: 315-443-1369 or email: info@urbanvideoproject.com 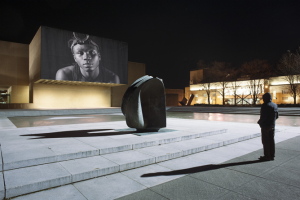 Good Luck takes us on a mind-bending journey deep into the unforgiving copper mines of Serbia and emerging thousands of miles away amongst an illegal band of gold miners in the Suriname jungle.

Good Luck (Portraits) Derived from a four-channel installation first presented in Kassel, Germany in 2017 at the international art biennial, documenta 14, this single-channel looping projection by artist Ben Russell presents a series of intimate black and white S16mm portraits of miners, as recorded between a state-owned large-scale underground copper mine in the war-torn state of Serbia and an illegal gold mining collective in the tropical heat of Suriname.  Made in the style of Andy Warhol’s SCREEN TESTS and filmed on-site (both under-and-aboveground), these hand-processed portraits are accompanied by a visceral soundscape drawn from the chaotic working environment of the men pictured.  In Good Luck (Portraits), the film’s subjects briefly pause in the infinite labor of mineral extraction to give us a subjective vision of their inner selves – a vision controlled by their own hand.  Here is the human foundation of capital, revealed.   The related feature-length film, titled simply Good Luck, will screen indoors at the Everson Museum for the related event on April 19 with the filmmaker present. See attached links: Light Work’s Urban Video Project (UVP)

Ben Russell (b.1976, USA) is an artist and filmmaker whose work lies at the intersection of ethnography and psychedelia. His films and installations are in direct conversation with the history of the documentary image, providing a time-based inquiry into trance phenomena and evoking the research of Jean Rouch, Maya Deren and Michael Snow, among others. Russell received a 2008 Guggenheim Fellowship, a FIPRESCI International Critics Prize (IFFR 2009) for his first feature film Let Each One Go Where He May. His second feature film, A Spell to Ward Off the Darkness (co-directed with Ben Rivers), premiered at the Locarno International Film Festival in 2013. Curatorial projects include Magic Lantern (Providence, USA, 2005-2007), BEN RUSSELL (Chicago, USA, 2009-2011), and Hallucinations (Athens, Greece, 2017). He currently resides in Los Angeles. In the summer of 2017 he was an exhibiting artist in documenta 14.

Urban Video Project (UVP), a program of Light Work in partnership with the Everson Museum of Art and Onondaga County, is an outdoor architectural projection venue dedicated to the public presentation of film, video and moving image arts. It is one of few projects in the United States dedicated to ongoing public projections and adds a new chapter to Central New York’s legacy as one of the birthplaces of video art using cutting-edge technology to bring art of the highest caliber to Syracuse.