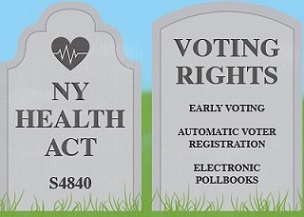 SYRACUSE, NY – May 24, 2017 – On Wednesday at noon, constituents of State Senator Dave Valesky will hold a funeral for progressive legislation outside his Syracuse office at 333 East Washington Street.  The New York Health Act, the GENDA bill, Greenlight NY, voting rights reforms, and the release of over $3 billion in public school foundation aid are just some of the items on the progressive agenda that is stymied by the Independent Democratic Committee’s decision to allow Republicans to hold the Senate majority. 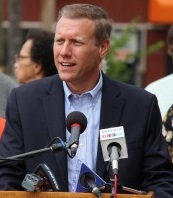 Demonstrators will be asking Sen. Valesky to leave the IDC and allow Democrats to take control of the Senate.  According to Rachel May, CNY Solidarity Coalition member and Valesky constituent, “These bills are victims of the cynical alliance between the IDC and the GOP.  Valesky’s support for Republican control in the Senate is a betrayal of Democratic voters and progressive causes.”

This demonstration comes on the heels of a week of scandal for Sen. Valesky and the rest of the IDC with the revelation that the GOP leadership has been funneling payments to them for jobs they are not doing. Valesky, for example, has received $30,000 over the last two years in stipends earmarked for committee chairs. Sen. Valesky and other conference members frequently refer to past ethics scandals in the State Senate as a reason for the creation of the IDC.  “Clearly, that justification doesn’t hold water,” says May.

This week a special election in Harlem is expected to give Democrats a numerical majority in the State Senate. According to Paul Weichselbaum, a member of CNY Solidarity Coalition, that should give Democrats renewed opportunities to get hearings and votes for progressive legislation about criminal justice and police reforms, climate justice, protections for New York’s immigrant communities, reproductive health, and tax fairness for working families, among other issues.  Because of Sen. Valesky and the IDC, however, the Senate will remain “under the iron control of Republicans, deliberately denying Democrats a working majority for the petty love of power.  This assures that progressive legislation passed by the Assembly will die in Senate committees, strangled without a hearing,” according to Weichselbaum.  “So we’re holding a funeral for them.”  Similar demonstrations will take place across the state in other Senate districts represented by IDC members.

CNY Solidarity Coalition, a community-based organization working to protect all Central New Yorkers from the dangers of the Trump-Pence-Ryan agenda, welcomes new members to join its efforts. The coalition’s website is www.cnysolidarity.org and can be reached at 315-472- 5478 or CNYSolidarity@gmail.com.