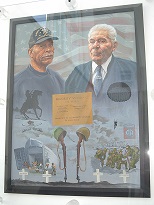 America’s “Minorities” or people of color have fought and died in wars since our nation’s birth. There are hundreds of thousands who fought in WWII and other conflicts that never were recognized for their service. Therefore, the existence of the World War II Minority Veterans Wall of Honor is especially important as we celebrate Veteran’s Day.

The monument at the OnCenter’s entrance on S. State Street consists of 245 names engraved on a black granite wall it includes African-Americans, American Indians, Latino Americans and Asian-Pacific Islander Americans of all World War II services, including the Merchant Marine.

On the wall above the memorial are the photos of two men PFC Charles Latham, Buffalo Soldier and the 489th Engineer Water Supply Division and Sergeant Albert A. Tarbell 82nd Airborne Division. These men are just representative of the diverse minority group members who served our country during World War II.

So this Veteran’s Day to take time to remember those who sacrificed their lives and futures for us. And for the minority service men and women who came home to a separate but equal “Jim Crow” America, imagine the sense of betrayal and abandonment racism delivered after being on the front lines for your country?

The least we can do is consider their sacrifice this Veteran’s Day.