The ad slams John Katko’s string of dishonest attack ads for taking comments from Vice President Biden out of context. The ad makes clear that Biden supports Dana Balter because she will be a champion for affordable healthcare. In his endorsement of Dana Balter, Vice President Biden called out John Katko’s support of Trump’s tax bill, which undermines the Affordable Care Act. Vice President Biden has said that the efforts by the Trump administration and Congressional Republicans to get the Supreme Court to strike down the ACA would end protections for 100 million people with pre-existing conditions, a claim confirmed by healthcare analysts.

Balter’s new ad is her seventh of the general election and will run in conjunction with the ad her campaign launched last week that features Republicans and former John Katko voters explaining why they won’t be voting for him this November. 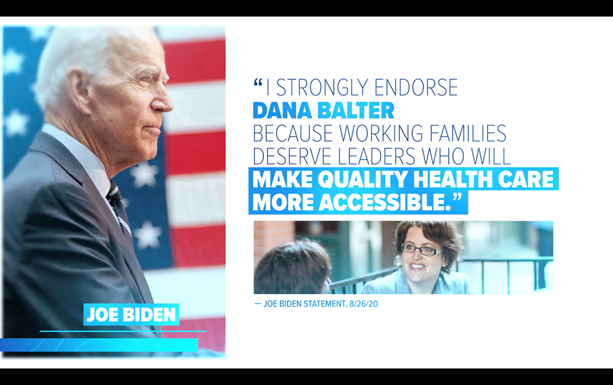 I’m Dana Balter and I approve this message.”

and he’s setting the record straight.

Dana Balter maintains a strong position in the race. Recent polling in the race shows Balter leading Katko 48% to 45%, and the Washington Post and Roll Call both rank NY-24 as one of the top 3 most vulnerable Republican House seats. In early August, President Barack Obama announced that Balter was among his first endorsements of the 2020 cycle. Inside Elections and Roll Call recently shifted New York’s 24th District from ‘Lean Republican’ to ‘Tilt Republican.’