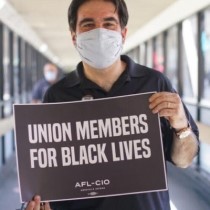 We are in a time of upheaval. Workers are at the razor’s edge, and they have had enough. The pandemic has exposed the frayed workplaces that have existed for many years where employers would rather cut their workers short by paying the minimum without any regard for their lives or wellbeing.  Wages have been stagnant for 50 years and workers are at their limit for what they will take. Things are beginning to shift in our inequitable economic system. Workers are tired of being taken for granted.

These shifts are happening across our country. We see it in strikes at Frito Lay and Nabisco.  We saw it in the organizing drive at Amazon in Alabama.  The pandemic has exposed the fact that wages have not kept up with productivity and has made poor working conditions worse.  Those that thought that workers were staying home because of enhanced unemployment benefits have learned that people did not return to work just because they ended the benefit (see the article on CNBC’s website: “26 States Ended Federal Unemployment Benefits Early. Data Suggests it’s Not Getting People Back to Work”). Employees are leaving the workforce because they are tired of risking their wellbeing. We see nurses and teachers leaving their professions pushed beyond the brink by bad management and a lack of support during the pandemic. Workers are fed up with a system that does not reward their labor and they are not going back to the way things were before the pandemic. Workers are taking power into their own hands by withholding their labor.

As we deal with the ongoing effects of the pandemic, there is no better time for all workers to demand a new world of work. We must continue to push the US Congress to pass the PRO Act, which would update our antiquated labor laws and level the playing field for workers. The PRO Act would expand protections for workers to exercise their rights to join a union and bargain collectively for better wages and working conditions. The PRO Act would bring US law closer to international standards by addressing many barriers that workers face when trying to unionize. Only through a union do workers have the legal ability to address issues in their workplace.

Workers have had enough with the greed and harm caused by employers who use a perverse system to feed off and deny employees bargaining rights by misclassifying them as independent contractors. The workforce, and their families deserve better. Workers deserve the PRO Act and an America that treats them with dignity and respect.

This Labor Day, all workers should commit themselves to seizing their power in the workplace. They have it in their hands, and put collectively into a union, can create a better world. We have to seize the moment and that moment is now.