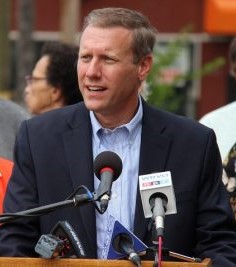 When I thought of politicians I rarely thought of them as caring about individuals, and I can’t say that really bothered me.  They do what they think is right for the group of constituents that voted them in.  Fortunately for me, when it comes to Senator Valesky, he does care about us as individuals.

I was a victim of various crimes committed by my now, and then, ex-husband.  He had been sentenced to prison time. I was very surprised to find that even though he was convicted, he was still entitled to my NYS Retirement benefits should anything happen to me. If he had succeeded in ending my life, he still would have collected.  I was aware that he was entitled to these, through choices I made, if I divorced him. I never thought you could kidnap and threaten to kill someone, and still get these benefits.  This did not seem right to me or others, and I felt I needed to correct this, partially to help me in the healing process.  I spent months contacting various people and agencies.  Among those I contacted were the NYS Retirement System, the Attorney General’s Office, and the State Comptroller’s Office, along with lawyers and many other individuals. I was told there was no changing this and was given suggestions that seemed to go nowhere.  It wasn’t until a union representative, from the school district for which I taught, thought it might be a good idea to contact Senator Valesky’s office. Then something positive began to happen.  Senator Valesky was willing to construct a bill on my behalf that would end any benefits to my ex-husband.  He got it passed through the Senate, and Assemblyman Magee sponsored it and got it passed in the Assembly.

I will always appreciate the time and effort of Senator Valesky.  So nice to know that he not only thinks of his constituents as a group, but also as individuals. That’s the type of leadership we need, especially in these times.  I will definitely be giving my vote to Senator Valesky and hope you will too.