On Tuesday, June 26 from 9:00 to 10:00 am, Syracuse Cultural Workers and friends showed their support for Dana Balter for Congress by holding large letters spelling out “VOTE DANA” at the Spencer Street overpass on I-81. 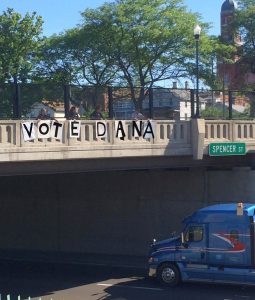 “It is time for the people of Syracuse and throughout the 24th Congressional District to be represented by someone who will listen to our concerns and actively stand up for our values,” notes Syracuse Cultural Workers Sales Manager Andy Mager. “Dana has shown over the past two years that she cares deeply about this community and will actively resist the anti-immigrant, anti-women, pro-corporate agenda which Trump and Pence have put forward and which has been largely supported by John Katko.”

Syracuse Cultural Workers strongly supports active engagement with the political process and voting in every election. To that end the national publisher has created a new broadsheet spelling out reasons why it’s so important to vote, and has created a new T-shirt, button and postcard all encouraging people to vote.

Syracuse Cultural Workers is a national publisher of calendars, posters, cards and other products related to social justice, sustainability and peace.  The small business sells to thousands of individual customers across the United States and works with museum shops, including the new National Museum of African American History and Culture in Washington, DC, the Martin Luther King National Historic Site in Atlanta, GA and the Holocaust Museum in Washington, DC, along with hundreds of other museums, bookstores, fair trade shops, galleries and cooperatives.