The 2016 Great New York State Fair will be the most significant Fair in decades, thanks to Governor Andrew Cuomo’s $50 million investment to revitalize the Fairgrounds and improve the quality of the fairgoer’s experience.  The new improvements will be complemented by the addition of dozens of new rides, events, food vendors and exhibits.  Below is a list of new activities and events at the 2016 Great New York State Fair:

The Wade Shows Midway is larger than ever, by about 3 acres, and will consist of 75 to 78 rides.  Among the new rides are:

In addition, several rides, including the Gravitron, Ring of Fire, Flying Bobs, and Jumping Star have received new LED lighting and other improvements for 2016.

Also, Kiddieland now has a permanent home, adjacent to the back of the International Building.

Cats Gone Wild: Ensuring the Future of Wild Cats is a new program from Hawk Creek Wildlife Center of East Aurora  that showcases some of the region’s large cats and explains their role in the ecosystem.

Live Stingray Encounter allows fairgoers to see and even touch stingrays (minus the stingers).  Staff members are on hand to answer questions and a video presentation runs continuously.

The Skyriver Butterfly Exhibit in the Horticulture Building will feature many new, exotic butterflies.  The exhibitor has earned a permit from the federal government to exhibit many foreign butterfly species. It’s the first time a traveling exhibit has been allowed to do so.

The Dairy Cow Birthing Center is back, though it has moved to a new home on the western end of the new section of the Fair, along Broadway.  Fairgoers can still sign up for text alerts to know when a calf is on the way.

Kosher food comes to the Fair in a booth operated by the Syracuse restaurant The Oaks.  There will be Kosher specialties as well as Kosher food given a special State Fair twist.

Everyone loves the crazy food you can only get at the Fair, and this year, there are several new and wild items.  Among them:

Other new vendors include:

Everything our vendors sell, along with their locations, can be found on the Fair’s Food Finder app.

With Love, Pakistan is a new one-day event on Aug. 27 that will allow fairgoers to sample Pakistani cuisine.  On the menu:

The Fair’s signature baked potato and sweet potato with all the fixings is still at the Fair, but is in a new location.  The booth is now in the former restaurant at the Horticulture Building but the price is still the same:  $1.   Also in the Horticulture Building is the new home of the Taste NY Market, offering free samples every day of a rotating roster of great products grown or made in New York State.

PAW Patrol is one of the most popular shows for very young children on Nickelodeon and for three days, the show’s national tour will visit the Fair.  From Sept. 2 to 4, young fans can take part in their own interactive mission in a life-sized PAW Patrol headquarters.  They can also meet the characters.

The members of the XPOGO Stunt Team will amaze you with their ability to defy gravity on their pogo sticks.  They’re back at the Fair after a time away and their show is as stunning as ever.

The Ride for $5 Day promotion is new.  Those who love to ride a bicycle can ride it right to the Fairgrounds on Wed., Aug. 31 and receive a discounted price at the gate—$5.  There’s a group gathering at the Salt Museum in Liverpool to ride the county’s beautiful lake trail to the Fairgrounds, but fairgoers can also come on your own.  There will be a place to park your bike securely inside the grounds.

The biggest thing that’s new about the Fair is the Fairgrounds.  A beautiful new Main Gate greets fairgoers, who will find that the historic section of the grounds is more open than in the past, with more seating.  Vendors have been moved out of the historic area and into the Fair’s new region for vending and activities, on either side of the new boulevard, called Broadway, which runs through the heart of the grounds.  There’s an emphasis on more open, comfortable spaces throughout the grounds, with more seating and shade, and more misting stations to help cool fairgoers on hot days. 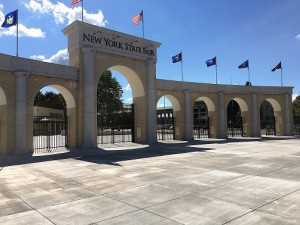 The new Main Gate isn’t the only aesthetic improvement.  There are more plants and new trees, along with attractive and energy-efficient LED lighting in the new areas of the fairgrounds.

Gov. Andrew M. Cuomo’s $50 million project to revitalize the nation’s oldest state fair also helped to update many things fairgoers can’t see, such as water, sewer and electrical lines.  However, fairgoers using the Midway will find far fewer speedbumps with their strollers or wheelchairs this year because so much of the power is now underground.

The New York State Fair, operated by the New York State Department of Agriculture and Markets, runs from August 25 to September 5, 2016. The Fair’s mission, reflected in its theme, “FIND YOUR GREAT,” is to showcase the best of New York agriculture while providing top-quality entertainment.

The 375-acre New York State Fairgrounds is undergoing the most significant transformation since it first opened its gates in 1890. The $50 million plan, announced by Governor Andrew M. Cuomo, revitalizes the grounds in many ways, improving the quality of the fairgoer’s experience and providing greater economic benefits for the region. Improvements include the dramatic new Main Gate— the arches of which recall the carriage gate that greeted fairgoers in 1900, a larger, 15-acre Wade Shows Midway that will hold more rides than ever, and the brand new 315-site Empire RV Park with underground water, sewer and electrical service. The plan will better position the New York State Fairgrounds as a premier year-round, multi-use facility that can attract more events and visitors from across the nation. Renderings can be viewed here.