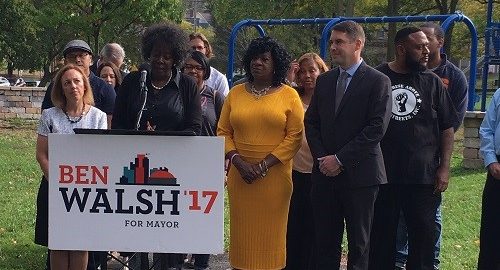 Ben Walsh was born and raised in Syracuse, growing up in a family whose hallmark was public service, Jim Walsh, Ben’s father was on Syracuse Common Council and went on to serve several terms in the U.S. Congress. Walsh’s Grandfather, William F. Walsh was Syracuse Mayor in the 1960’s and also served in Congress.

Now a political candidate, Walsh says he’s ended up where people expected him to be, “aspiring for public office.”

He spent his high school years at Bishop Ludden, graduating from West Hill High school. Walsh is an Ithaca College graduate and attended Syracuse University’s Maxwell School for his MPA. Even with the legacy of public service with the Republican Brand, Walsh asserts his independence,” I’ve been registered as an independent since age 18.” 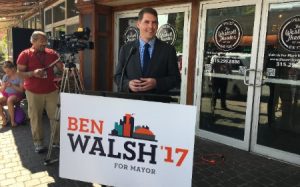 Ben Walsh at the Westcott Theater

He worked at the Metropolitan Development Association before it became Centerstate CEO, according to Walsh,” that’s where I cut my teeth in the economic development arena, from there went to the City of Syracuse, where I was Director of Economic Development. “

Currently Walsh is employed in the private sector at McKenzie Hughes where he does business development.

According to Walsh, Syracuse is considered a weak market city which means that many of these projects don’t make economic sense on their own and do require some sort of public subsidy. Not afraid to take advice the candidate intends to; “Look at other communities for best practices.”

As mayor he says he’s going, “to make sure that when we are being asked to devote our limited public resources in projects, we do so in a way that maximizes public benefits.”

When asked about projects he said there were a few. He’s not personally taking credit as he acknowledges that it takes many people to bring these projects together. 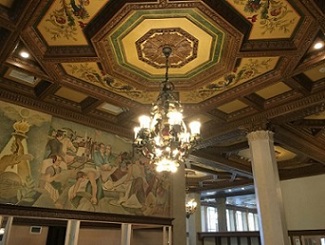 The Hotel Syracuse – When he took his position the hotel had gone through a number of owners and   transitions. He was introduced to Ed Riley. Walsh continues,

He had the perfect resume, he’d renovated historic buildings and hotels around the world, and living right here in Camillus.

For two and ½ years met every Monday morning until it got done. No one individual is responsible, according to Walsh,” if you took one person out of the mix the project wouldn’t be possible. The Hotel is one and I take great pride in my role in that.

The corner property was vacant for a long time given the size and visibility of it; a lot of people on the west side of town were constantly asking for years, what we were going to do with it. We pitched it to a few different developers along the way, but just never quite found the right fit, until Jim Mernali came along; he’s invested a lot on this side of town.” Mernali owns, United Auto Supply, and renovated the former Marcellus Casket company.

We worked with Jim on the former Sam dell site to make sure it was designed properly. It quickly transitions to mixed use and quasi use including residential. You look at the Aldi’s and it’s built up to the sidewalk to try to help transition.

Working with developers and businesses and to understand that all development is not good development and we shouldn’t just support everything just for the sake of development.

What kind of campaign will you run?

Walsh, “Our campaign slogan is Rise above, I really believe in that on a number of different levels.  I talk a lot about rising above politics and petty personal disputes and the things that hold us back as a community. We as a community have a lot of forces working against us. Macro-economic forces that we have very little control over, which makes it that much more important to control the things that we can, but all too often in this community we work against ourselves.

We have a community that is plagued by poverty, I want to send a message to people that are living in poverty, that I want to help to put them in a position to rise above those circumstances. I want to share a message of hope and optimism for the city, while at the same time being very realistic and real about the issues and the challenges that we face.

To have open and real discussions, about things that have held us back in this community whether the issue is race or privilege or class. Those are all things that we need to talk about.   And we need to have open and frank conversations about. I think we can do it in a way where we’re still aspirational and hopeful. I’m proud of a track record of bringing people together and getting and things done.

Urban CNY Asked Ben Walsh,
“Why Do You Want to be Mayor of Syracuse?”

1. Why do you want to be Mayor of Syracuse?

My wife, Lindsay, and I have been proud homeowners on the city’s west side for 11 years. With our first daughter currently enrolled in the Syracuse City School District and our second soon to follow, we couldn’t have more riding on the future of our city.

With so much at stake, both individually and collectively, I am committed to doing everything in my power as Mayor to ensure the strength and safety of our neighborhoods and schools, increase access to economic opportunity for all, and address the many other challenges and opportunities facing our community. I care deeply about our city and I feel strongly our best days are ahead of us.

3. Without funds from the state or federal government, how do we handle our crumbling infrastructure?

The City of Syracuse annual budget for the fiscal year ending June 30, 2018 proposes to transfer $2.3 million in revenue from the water fund and $525,000 from the sewer fund into the City’s general fund. This has been a consistent practice of the current administration. While it may help balance the budget in the short term, it is worsening our problems in the long term by robbing the City of an opportunity to leverage and reinvest these funds into our deteriorating infrastructure. As Mayor, I will end this practice and ensure any new revenue generated from our infrastructure goes right back in to support the system it came from. I will also work closely with the County to identify opportunities to achieve greater efficiencies through shared services when it is in the best interests of the city.

4. With Federal funds through CDBG currently allocated to fight blight and poverty, what would you do differently with CDBG that we aren’t doing now?

Before coming up with new ways to spend CDBG funds we must first ensure existing and future funding remains in place. The City’s CDBG allocation has steadily declined for years and under the current federal administration, it is at risk of going away completely. As Mayor, I will work closely with our federal representatives to preserve and hopefully expand CDBG funding. In addition to continuing to fight blight and poverty, I would expand the use of CDBG funds to do more to support economic development within our neighborhood business districts.

5. Why can’t we set a base level of taxation and/or fees that all developers must pay municipalities regardless of “their” investment?

We can. Every property owner in the City of Syracuse has a legal obligation to pay property taxes. In some cases, when owners/developers invest a significant amount into their properties, they may be eligible to receive a property tax exemption or negotiate a payment-in-lieu-of-taxes (PILOT) agreement to ease the higher tax burden associated with the investment. In these cases, the exemptions freeze existing property taxes at their base rate for a set number of years before phasing into the full assessment, based on the investment made in the property.

6. How would you handle snow removal on sidewalks, this includes both commercial and residential? (It could be said that current methods aren’t working.)

As Mayor, I will take a hard look at the Rochester, NY model, which involves the City providing sidewalk plowing services when four inches of snow or more accumulates.  The city provides this service through an embellishment fee charged to every property owner based on front footage. In lieu of a city-wide sidewalk plowing service, I would explore a more targeted approach which would focus on school routes and other heavily traveled pedestrian corridors.

7. Why can’t the city handle sidewalk snow removal like Rochester?

FYI-Rochester has an “embellishment fee” based on your property frontage. (They begin plowing sidewalks at 4 inches) Average “Homestead charge” $35.13 annually. http://www.cityofrochester.gov/sidewalkplowing/
See above response.

8. How do we attract higher paying jobs to where the underemployed and unemployed in Syracuse live?

I have a proven track record of helping businesses create and retain jobs in Syracuse. As mayor, I will take the following steps to pull people out of poverty. To remove barriers to opportunity, I will eliminate the bureaucratic red tape that discourages investment and I will leverage my relationships in the business community to bring living wage jobs back to neighborhood business corridors. I will also continue to set lofty goals for MWBE participation on city contracts and support programs that build their capacity to meet them.

To better prepare our residents for the workforce, I will expand the school district’s career and technical education (CTE) programs, which produce students with better grades, less absences, and higher graduation rates. I will also support “dual client” workforce development models like Work Train, which bring employers and employees together to ensure people are being trained for available jobs.

9. Price Rite on South Avenue appears to be a success. How would you promote more projects that bring jobs and entrepreneurs to our neighborhood commercial centers?

I take great pride in the role I played supporting the South Avenue Price Rite project during my time at City Hall. I supported the efforts of the Syracuse Urban Renewal Agency (SURA) to acquire the properties necessary to undertake the project and I worked closely with the development team to secure the necessary financing to make the project economically viable. I also supported the development team’s efforts to ensure city residents were employed on the project.

To promote more projects that bring jobs and entrepreneurs to our neighborhood commercial centers, we should use the Price Rite project as a model to show other neighborhoods and developers how to replicate it. As Mayor, I will leverage my relationships in the neighborhoods as well as the business community to do just that.

10. How long would it take to make these inner-city commercial centers a priority?

Redeveloping our commercial centers was a priority when I helped create the City of Syracuse Main Street Program during my time at the City, and it will be a priority when I’m Mayor. The Syracuse Main Street Program used CDBG funds to support the redevelopment of the Lower South Avenue and Butternut Circle commercial corridors. I look forward to seeking out additional resources and expanding the model into other neighborhoods as Mayor.