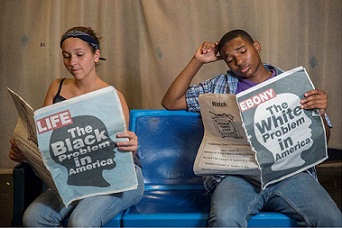 “Let’s Talk About It”, explores the impact of racism on American Teens. The show includes a reprise of the national award winning show, From the Back of the Bus. The August 12th production is followed by a dialog Circle facilitated by Jackie Warren-Moore.

Let’s Talk About It, celebrates the success of the Media Unit’s 40th season of performance and production for Central New York teens, Presented in collaboration with 100 Black Men of Syracuse.

In recent years, Media Unit productions included a four performance run of Why Bully at the Great New York State Fair, an award for “Excellence in Devised Theater for Original Writing” at the Michael Harms Theater Festival and dance extravaganzas at the Westcott Cultural Festival and the Arts and Crafts Festival.

The Media Unit’s annual celebration takes place at The Bevard Theater at the OnCenter, August 12th 7:30 p.m. Tickets are $10, for information call 315.478.UNIT