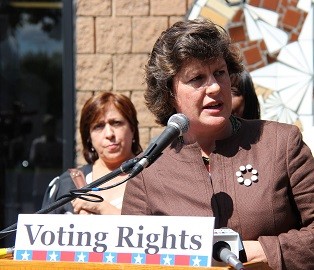 Miner: With Fewer Than 30% of Voters Participating in Elections, It Is Clear Something Needs to Be Done

SYRACUSE, N.Y. – Mayor Stephanie A. Miner on August 13th, stood with activists and local elected officials in front of the Southwest Community Center to urge New York State to pass sweeping measures aimed at improving the right to vote for all New Yorkers. These measures, including early voting, “no excuse” absentee balloting, and universal voter registration, have been successfully implemented in other states and been proven to increase voter turnout. New York State currently has the fourth lowest rate of voter turnout in the nation.

“With less than 30% eligible voters participating in the 2014 elections, it is clear that something needs to change. New York’s system of voting is archaic and we need to remove barriers to entry to ensure all New Yorkers can and will participate,” said Syracuse Mayor Stephanie A. Miner. “With common sense steps like early voting, ‘no excuse’ permanent absentee balloting, and universal registration, we could increase voter turnout and engage more citizens in the political process.”

In her letter, Mayor Miner outlines three proposals aimed at easing voter registration and increasing voter turnout. Those proposals are a twenty day early voting period, which is currently proposed in A4433/S3813. Currently, 33 states have some form of early voting which allows individuals to vote in advance of Election Day.

Another proposal the Mayor endorsed is “no excuse” permanent absentee voting. 27 states currently permit voters to request ballots without declaring a reason. In New York, voters who request absentee ballots are required to declare a reason, such as absent from the county on Election Day or illness. Voters can only receive absentee ballots on a permanent basis if they can claim permanent illness or disability. Currently, two bills in the state legislature, A3874 and S4456, address no excuse absentee voting. Mayor Miner seeks for these bills to advance, have an agreement between conferences resulting in “same as” legislation, and adding an option for permanent status. 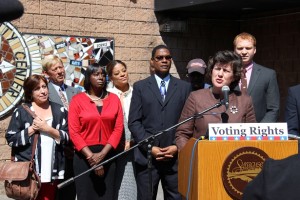 Mayor Stephanie A. Miner with activists and local elected officials in front of  Southwest Community Center

The Mayor also encouraged legislators to enact universal voter registration. Recently implemented in Oregon, universal voter registration automatically enrolls each eligible voter unless they choose to opt-out. After it was implemented in Oregon, it enfranchised hundreds of thousands of new voters.  This would especially impact first-time and other young voters. It is well known that when young people become in the habit of voting at an early age, it stays with them for a lifetime.

Mayor Miner added: “These proposals will help ensure that those who need strong representation in government the most – young people, the underprivileged, poorer communities – will have a strong voice. That results in more transparent, accountable, and accessible government for all citizens.”

Miner’s announcement coincides with the 50th anniversary of the federal Voting Rights Act, which was enacted on August 6, 1965.

Below is a copy of Mayor Miner’s letter:

With the current influx of money into our political system, it has become increasingly important to engage citizens in the political process. In the 2014 elections, only 28.8% of New York State’s eligible voting population participated, despite three statewide elections and 27 congressional elections. This rate of voter turnout is the fourth lowest in the nation. Voter participation is key to ensuring citizens are engaged with their governments which is critical to a thriving democracy. I urge you to support legislation that would improve access to voting for all New Yorkers.

As the burden to vote becomes greater for many in the United States—even in New York—access to the ballot and the ease of voting has lagged behind the technological advances we rely upon in almost every other aspect of our life. It has also had a disproportionate impact on those in our society who need strong representation the most. Syracuse has one of the highest poverty rates in the United States, with 35.7% of the population living in poverty. The Syracuse City School District has the fourth highest poverty rate in New York State with more than three quarters of students qualifying for free lunch. Voter participation rates mirror income levels. It is time we pull back the curtain to the voting booth and give each New Yorker easy, fair, and consistent access to their right to vote.

The first step to improving ballot access is to pass A4433/ S3813, a bill would establish early voting twenty days before an election. There are now 33 states in our country that have adopted some form of early voting with the time frame stretching from three to 45 days. When voters have an increased time frame to access the ballot box, they are more inclined to vote and encourage others around them to do the same.

The next step is to enable “no excuse” permanent absentee voting. Currently, there are 27 states that permit this type of absentee voting, allowing eligible voters to request a ballot they can submit by mail without mandating the voter declare a reason for voting absentee. Out of those 27 states, 6 states allow voters to join a permanent absentee list, meaning they will receive an absentee ballot automatically for all future elections. At this time, two bills which would set up a “no excuse” permanent absentee system, A3874 and S4456. It is important to ensure same-as legislation is agreed upon by the conferences and includes a permanent option.

The third step we can take is to support universal voter registration. This allows for every citizen to be automatically registered to vote at age 18 unless they choose to opt out. The law would remove another hurdle that disproportionally affects young voters and the underprivileged. This proposal was recently implemented in Oregon, which then added hundreds of thousands of new voters to its rolls. This would help reinvigorate citizens’ confidence in government and remind each of us that the more people who participate in government, the stronger our state and country become.

These proposals will increase accountability, transparency, and make government more accessible to all New Yorkers. They have been tested across the United States and been proven to increase voter turnout and representation. New York State’s archaic voting rules disproportionally affect the poorest members of our community, individuals of color, and young people—those people who most desperately need the attention of their government. We can no longer exacerbate this problem by perpetuating the status quo. It is time to act and I strongly encourage you to move these proposals forward.

Stephanie A Miner
Mayor of Syracuse